The next time I post, I will be in Los Angeles again. I’m going for a 10-day visit, at the end of which I’m participating in a 3-day writer’s conference and speaking on a panel about Writing About Loss. Before I leave, I’m being interviewed on HuffingtonPost Live (tomorrow, Thursday, March 19 at 4:00pm ET). Needless to say, it’s a very busy time, and I’m more than a little stressed.

I’m excited to go back to Los Angeles, but also nervous. When I tell people this, they don’t understand why. I’m not sure I totally understand either. I did live there for 19 years. But there’s something about going back to a place you’ve left.

Part of me is nervous that once I’m there, I’ll regret having left, like I’ll be walking (driving) around feeling homesick the whole time.

Another part of me is anxious about being asked the same questions over and over again: “How’s it going in NY? How do you like it? Are you glad you left? Are you coming back?”

I’d be lying if I didn’t admit that just the thought of being in such a big city, dealing with that traffic, makes my stomach tighten a little. I’ve basically been living in the woods for the past eight months — in a quiet, zero traffic, distraction-free, practically people-free zone. I’ve been in “writing mode,” which is a lot different than “meet and greet and speak publicly mode.” Yes, I’ve been to NYC periodically, but I stay with family in Brooklyn and tend to keep my activities local.

Another source of nerves (and emotions) is that being in Los Angeles will remind me of Kaz in a way that I haven’t experienced in a while. Living in NY, where Kaz and I never visited together and therefore shared no memories of, has been a sort of respite from all the emotional triggers that come with familiar sites in a shared geographical location. I know I will be alright, but it’s the not knowing where and when I will encounter these triggers that makes my nervous.

Finally, my heart aches at leaving Ruby behind (it was too complicated and expensive to bring her). I’ve never been away from her for this long, and am already feeling the longing. She’ll be staying with family and going to doggie daycare during the day, so we’ll both be busy. But it will be strange to be apart. Our days upstate are, if nothing else, an exercise in routine. Everything happens around the same time every day. We’re nearly always together, and she is nearly always off leash, running free.

All that said, I am looking forward to the trip, to seeing all my friends, feeling heat, going to the beach, meeting many other talented writers, getting as much done as possible, visiting the mountain where I released Kaz’s ashes and more.

Ironically, this will be my first time visiting Los Angeles. I will miss upstate NY, but I’ll be back soon.

Looking forward to sharing the journey with you, as always. xo 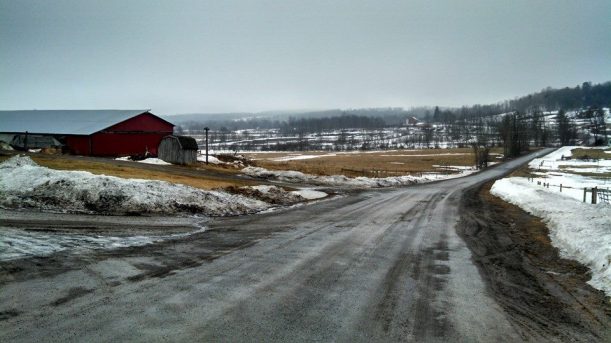 Before moving to upstate New York (and once I got here), the main question people asked me was, “Have you ever lived through a winter there?” It seemed to be the main concern. I shrugged it off, “No, but I grew up on the East Coast and lived in Vermont for four weeks in January. I’ll be fine!”

But I was a bit apprehensive.

Living in Los Angeles, a city that fluctuates between warm and hot, for 19 years was long enough to thin my blood. I became one of those people who shivered when it was 60 degrees out, and froze when it was below 50. I had visited the East Coast in wintertime, and even seen some snow in Joshua Tree Desert once, but it was fleeting (and freezing).

I tried to mentally prepare myself for winter by reading three winter-based books last fall: Ethan Frome by Edith Wharton (star-crossed lovers try to kill themselves by sledding into a tree), The Half-Skinned Steer by Annie Proulx (old man gets lost and freezes in Wyoming blizzard), and We Have Always Lived in the Castle by Shirley Jackson (two sisters – one a murderer – struggle to survive in old, haunted, cold New England mansion). BRRRR!!!

Then the first major storm hit New York in mid-November, dumping 5-7 feet of snow on Buffalo (a nightmare). But where I live, 350 miles to the East, we got nothing.

Since then, we’ve had snowfalls of several inches and temperatures low enough to freeze an entire lake. This is pretty mild compared to what it could be. People keep telling me the worst is still to come. To which I say, BRING IT.

As it turns out, I have sort of fallen in love with winter. 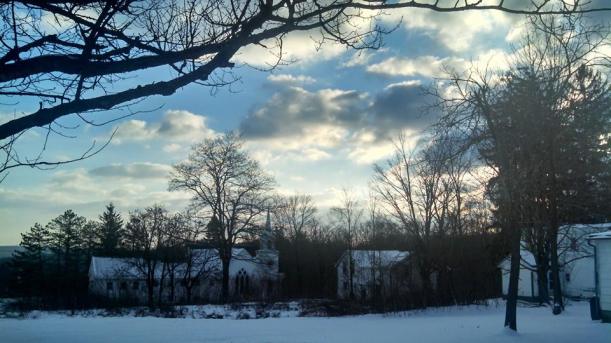 I live in a rural area, which is different than living in a city, and if I had to drive to work, I might feel differently (to be fair, they clear the roads pretty quickly here, even the smaller country roads). But I think winter is gorgeous.

The patterns, textures, skies and colors… I haven’t experienced it in such a long time, I’m actually fascinated by the fact that everything nearly dies, or seems to die but actually doesn’t. It reminds me of the desert in the way it’s so harsh, but still teaming with life.

The beauty of seasons, something I used to miss in LA, is that they are literally Nature at work. They’re also a marking of time. When you live in an area that’s sort of the same every day, you can wake up one day and suddenly realize six months have gone by and you hardly even noticed. 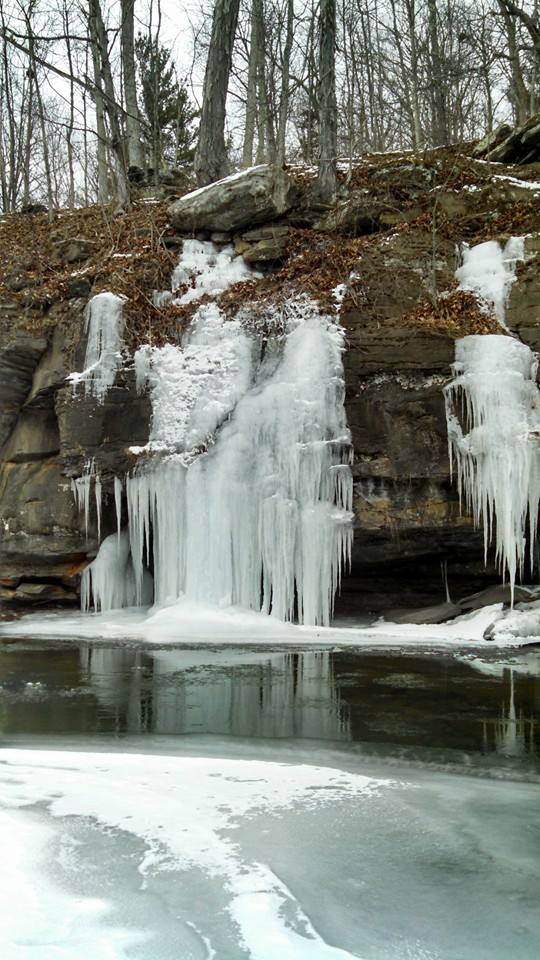 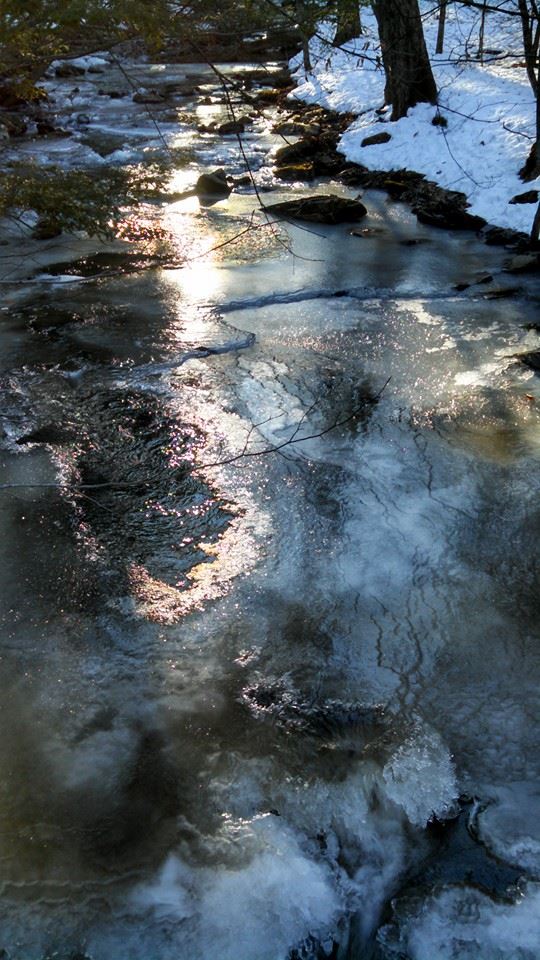 I still can’t handle being cold so I am EXTREMELY bundled up when I go outside. I wear at least two of everything and lots of thick cotton, wool, down and silk, which is very warm. For extra cold days, I wear a fur babushka hat over my normal hat. I look ridiculous, but it keeps me cozy even though it’s freezing. I still read outside, take long walks, hike, and do everything I did before except ride the motorcycle.

Perhaps the biggest reason I’m enjoying winter, though, is Ruby. We spend no less than two hours outside every day, and her joy is absolutely contagious. 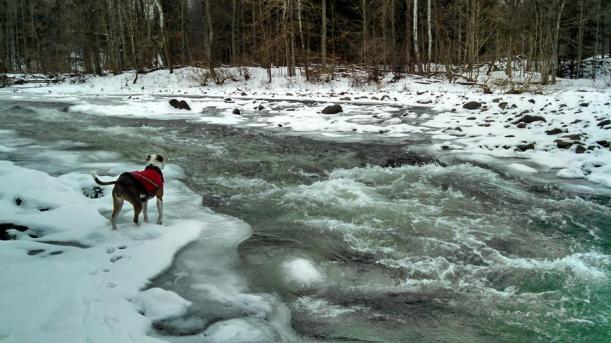 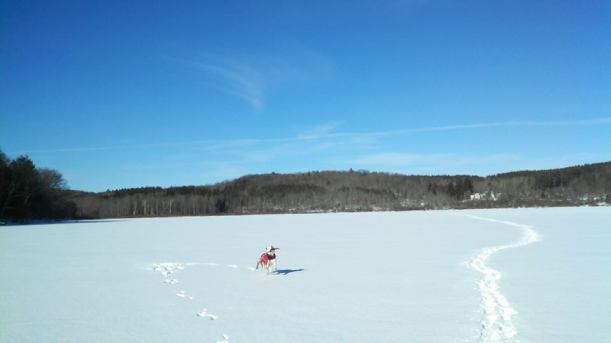 The big open space above is the frozen lake, btw. 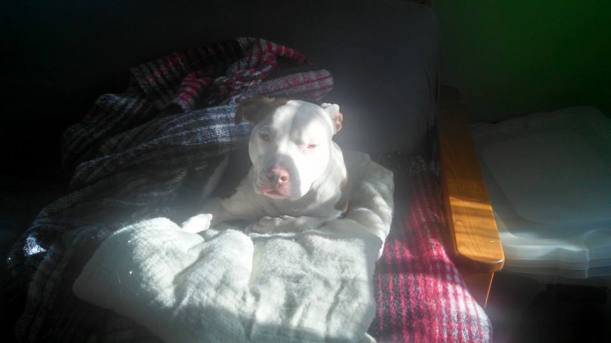 If you live in a big city and have warm clothing, I highly recommend going outside, even in the cold. Take a walk to the nearest park, river or lake, enjoy the fresh air. There are still a few birds singing. How they survive the temperatures, I have no idea, but it’s lovely to hear them.

I am very much looking forward to seeing spring. In the meantime, I hope you’re able to enjoy winter’s beauty… and of course, stay safe and warm.