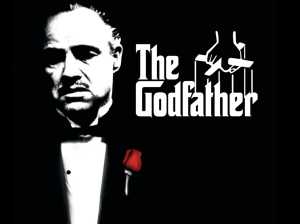 In this day and age, I think it’s safe to say that most people have either seen or at least heard of the film THE GODFATHER, starring Marlon Brando, Al Pacino, James Caan, Robert Duvall, John Cazale and Diane Keaton, along with a host of other stellar actors. It was released in 1972, directed and co-written by Francis Ford Coppola, based on the book THE GODFATHER by Mario Puzo, and produced by Paramount Pictures, which was being run by Robert Evans at the time.

Everything about this movie is legendary. It was nominated for eleven Academy Awards and won three: Best Picture, Best Actor (Brando), and Best Screenplay Adaptation (Puzo and Coppola). It was the first “crime family drama” of its kind. Its characters, shooting style, music and dialogue all became part of our national consciousness and filmmaking history. Brando’s performance is still considered one of the best film performances ever, revered, mimicked and parodied the world over.

For those of us in the movie business, or who are film buffs, the making of the film is also legendary. In the biographical documentary THE KID STAYS IN THE PICTURE, Robert Evans talks about some of the epic fights he had with Coppola before, during and after the shoot, and the enormous pressure he was under to make sure the film was a success for the financially ailing studio.

Last weekend, as I was dissecting my book and stitching it back together, I watched the film with the director’s commentary on so I could hear the other side of the story.

Now it’s difficult to imagine, but at the time Coppola wasn’t a famous director. He was an up-and-coming director and only 32 years old. He had a young wife and children. He didn’t get paid much and neither did anyone else on the film, which was made for 6.5 Million. Considering how much it grossed (approximately 133.6 Million domestic, 243.8 Million worldwide (www.boxofficemojo.com), the budget was miniscule.

To save money, Coppola had to get creative. Certain wide shots and long shots were filmed without the real actors, but with extras dressed to look like them, and the actors’ voices dubbed in later. Coppola used his own newborn baby, Sofia Coppola, for the infamous Baptism scene/sequence. He hired other family members to do the music and be extras. When he edited the movie, he lived in the “maid’s room” in James Caan’s 2-bedroom apartment.

The best part of the commentary is when he talks about his fears of getting fired, which were very real and lasted almost the entire time. It’s a strange Hollywood thing, but just because a studio hires you doesn’t mean they support or trust you. Coppola was faced with opposition to practically every decision he made: the actors, the music, the locations, the lighting, the editing… EVERYTHING.

At one point, he was so convinced he was getting the axe, he called Robert Evans’ secretary to ask if he should even go to set. She told him to go because they wouldn’t fire him mid-week (it was Wednesday), but on the weekend. He used the time to re-shoot a scene the studio had complained about, and fire the people on his team whom he considered “the traitors.” A pre-emptive strike, if you will. And it worked. Paramount was flustered and Coppola made it to another week.

There were times when he was so stressed, he didn’t know if he could keep going. There were times when he felt insecure. He remarks that when THE FRENCH CONNECTION, a high octane action-thriller, came out in 1971 (while he was editing) and was a huge hit, he was sure that no one would want to see his dark, slow movie with a whole lot of talking. Of course, now we know that he did keep going. But he overcame all those obstacles without knowing whether the film would do well. He overcame them by believing in himself.

According to Coppola, the moral of the story is that a director should trust his vision and stick to it. If he had caved to the demands of the studio, or his own doubts and fears, the film would have been totally different and most likely not a success. The choices he made were unpopular. He had to defend them tooth and nail. But in the end, those choices are what we remember about the film and why people like me, and many others, still watch and study it thirty years later.

And by the way, the horse head was real. They got it from a dog food company. 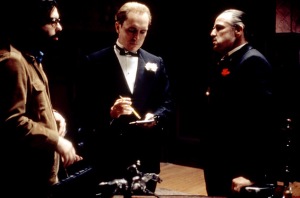